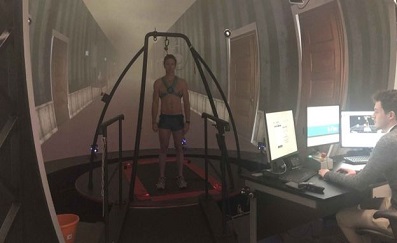 The DMRC revealed its state-of-the-art rehabilitation facilities for the first time thanks to coverage from multiple news outlets this week, including a live broadcast on BBC Radio 5Live on 14th May.

The Computer Assisted Rehabilitation Environment (CAREN) is the first High End 360 degree dome version of the system in Europe. The CAREN High End is a versatile, multi-sensory system used for clinical analysis, rehabilitation, and the evaluation and training of human movement, balance and gait. Other variations of the CAREN include the CAREN Extended, as used by rehabilitation facilities such as the Brain and Spinal Injury Centre (BASIC) in Salford.

“In three months time, I will be able to see how I’ve improved. For me to see what I’m doing is amazing,” says Flt Lt Nathan Jones, who injured his back on a flight to Afghanistan five years ago. He has since had three operations to repair nerve damage, and has only just started to walk without a stick again. “It shows which muscles are firing. I’m amazed at how badly I was walking. It feels brutal but it takes something like this to pinpoint where I’m going wrong.”

DMRC clinical research manager Russ Coppack says: “It is a fully immersive environment. It allows us to place the patients in a real-world environment. It shows exactly the position of your body – it’s very hard to give yourself self-feedback, because you can’t see. Using apparatus like this, you get a full visual on it. It takes something like that to actually highlight and emphasise what your failings are.”