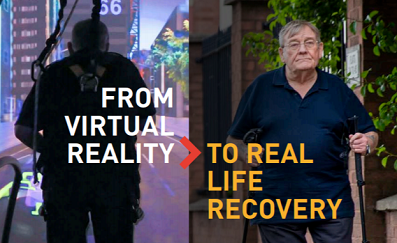 The latest case studies from the Brain and Spinal Injury Centre

We are pleased to share new case studies with you from the Brain and Spinal Injury Centre (BASIC) in Salford, Manchester. The team at BASIC use the Computer Assisted Rehabilitation Environment (CAREN), developed by Motek, for a wide variety of rehabilitation including programmes for veterans.

Chris served in the Army for 12 years, including two tours of Afghanistan and two of Iraq.

He sustained back injuries and was diagnosed with PTSD, which made adapting to civilian life very difficult and it eventually caused him to have a breakdown. Chris’ wife Claire recalls, “His condition led him to get fired from his first civilian job. We almost lost our home as a result because it was only me working. It’s been very much a battle along the way.”

Chris first visited BASIC on an open day and was relieved to find people who were willing to listen and help him.

Chris started his treatment on the CAREN machine. Its virtual reality environment was suitable therapy for his back injury, and he made it his goal to be able to run 50 metres so he could play more with his children. Next was the 3MDR treatment where Chris walked on the treadmill while undergoing therapy to treat his PTSD. The aim of this was to help Chris deal with the painful memories of conflict.

The results from the different technology treatments came quite fast for Chris.

After just seven sixty-minute sessions, Chris felt much calmer in himself and has been in a good place since finishing his therapy. It also makes him happy to know he is always welcome to return to BASIC whenever he feels the need to. His wife, Claire underlines the impact BASIC has had on their family, “to have the support here and the treatment and come home, it’s brought peace to our house. The level of support we’ve had here totally outweighs everything.

Kevin joined the Army at just 16, a boy soldier in the Ordnance Corps.

He quickly gained a reputation as a skilled young soldier with a can-do attitude, which saw him gradually climb the ladder. But injuries sustained during 24 years of service caused his health to deteriorate which resulted in both knees as well and his hip and shoulder being replaced plus three spinal operations to fit titanium rods into his back. Recalling his difficulties, Kevin says, “I couldn’t walk on crutches, couldn’t cross the road or anything. I was isolating myself.”

Kevin heard about BASIC and found that he was eligible for treatment there. While he was sceptical at first, he was surprised at how effective his treatment on the CAREN machine was compared to treatments he’d had in the past, “I finished absolutely exhausted and went home and slept for two hours. Everything was loose: my back, the muscles, my neck, my arms, my legs.” Kevin’s personal goal was to complete one of the Wainwright Walks in the Lake District.

Kevin returned to BASIC twice a week. In his own words – “All of a sudden, I had the confidence to go walking and that was a great thing for me, which I would have never done. If I hadn’t done BASIC, I would probably be sat in a chair because I can’t think of anything else that would have got me on my feet, would’ve loosened me up and got me moving around whilst being fun to do.”

He also adds, “I’m so grateful to BASIC because it really meant… well it’s extended my life, I would say.” And sure enough Kevin was also able to go on that Wainwright Walk that he’d made his goal.

John, a 31-year-old military veteran sustained an AVM (a bleed to the brain due to ruptured blood vessels) while working at home. He was put into an induced coma and underwent brain surgery, which left John with significant weakness, vision loss and hypersensitivity on his left side. All of this meant he was immobile and was dependent on someone else to look after all his needs. John says, “I was completely paralysed down my left side and was told I would never walk again.”

Eight weeks after his major surgery, John was discharged from hospital. But thankfully, John was referred to BASIC under the veteran
bursary programme. His treatment started with the physiotherapist identifying the appropriate virtual reality programs for John to use on the CAREN machine. After being harnessed up on the CAREN for safety, he started his twice weekly sessions on the machine. John’s main goals were to be able to run again, to reduce the hypersensitivity on his left side and to increase his social participation.

After 18 sessions on the CAREN, all of John’s clinical outcome measures improved and he made significant progress in his daily living abilities. From being unable to step safely over obstacles before his treatment, John has achieved the incredible goal of being able to run again. He is now volunteering at an Equestrian centre and is independently participating in social situations again. “Without the support of BASIC I would not be where I am today. I have achieved my main goal of being able to get back to work.”

About BASIC and the CAREN

The Brain and Spinal Injury Centre (BASIC), based in Salford, is leading the way in the recovery of injured veterans.

BASIC exists to maximise independence for those with a brain injury, from which they can take a number of years to recover and lead to a loss of the things that can make life worth living, like work, income and relationships.

Working in partnership with a number of NHS trusts, the Computer Assisted Rehabilitation Environment (CAREN) system enables veterans with brain and spinal injuries to practice real life situations in a safe and controlled environment, leading to improved physical stamina, better
cognitive skills, dual tasking and improved confidence. It does this by putting them at the helm of a life size video screen, forcing them to use wasted muscles and teaching the basic skills necessary to recover quicker from brain and spinal injuries and other disorders such as PTSD.

BASIC relies largely on donations and grants to run its life-changing services in collaboration with the NHS. The centre helps rehabilitate injured military veterans. This means that former service personnel can receive the latest treatment for head, spinal and orthopaedic injuries. So far, 37 veterans have benefited from virtual reality rehabilitation sessions and three are having ongoing treatment.

Thanks to our supporters, we can help ensure this pioneering work continues.