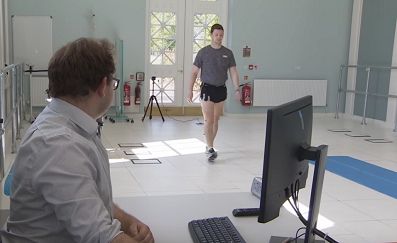 In the video you can see AMTI’s force plates in use in the DMRC gait lab, as well as Europe’s first CAREN High End (Computer Assisted Rehabilitation Environment) which was developed by Motek.

The biomechanical lab at the DMRC is much bigger and more advanced than its predecessor at Headley Court, which was decommissioned last year and moved to the new Stanford Hall site. As a patient walks over the AMTI force plate which is mounted in the floor, the therapist can get a clear idea of how the patient is distributing their weight, as well as whether they are overloading certain parts of the body. This then enables the therapist to tailor treatment for the patient to stop further injuries in the future.

The CAREN High End can be used for a range of immersive experiences, from showing patients on the treadmill how their body is moving, to moving the world around them to see how the patient’s brain and body copes with radical change. This is due to many patients at the DMRC undergoing recovery for brain injuries as well as other physical injuries.

You can see more videos and images of the CAREN High End in use at the DNRC training day last year.