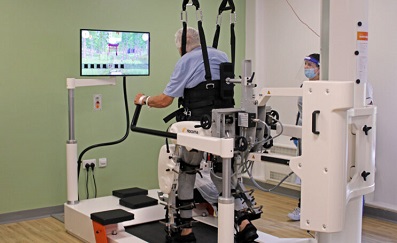 We are delighted to share that University Hospitals Dorset NHS Charity have successfully fundraised to purchase a robotic gait training machine for the Acute Stroke Unit, which will help stroke patients at the Royal Bournemouth Hospital relearn how to walk.

Over 720 people are admitted to the Royal Bournemouth Hospital each year with stroke, and 75% of these have lower limb weakness. But the brain can adapt and people can relearn to walk through repetition and practice.

The charity’s “Walkerbot Appeal” to raise funds for the LokomatPro by Hocoma was supported by countless generous donations from charitable organisations, local businesses, and individuals who hosted coffee mornings, ran marathons and even parachuted out of planes. Former AFC Bournemouth player Steve Fletcher also joined the campaign to launch fundraising efforts.

The LokomatPro is a state-of-the-art robotic rehabilitation device which enables intensive gait training for severely impaired patients – even those who can’t move their lower limbs at all. The LokomatPro features a robotic exoskeleton, dynamic body weight support, a treadmill, and Augmented Performance Feedback using interactive game-like exercises for optimal patient challenge and motivation.

The device is individually adjustable to each patient, ensuring their safety and comfort during training. Speed, loading and the amount of robotic support given can also be adjusted, which tailors the intensity of each session to each patient. Each patient has their own profile which tracks their progress and therapy goals.

Patients can complete hundreds or even thousands of steps per session, compared to traditional manual physiotherapy. This will make a huge difference not only to a patient’s rehabilitation and progress, but also their quality of life and confidence. Intensive repetitive rehabilitation at an earlier stage in a patient’s recovery also helps patients be discharged sooner and recover earlier at home.

The LokomatPro was developed by Hocoma, the Swiss-based world leader for advanced technologies for movement rehabilitation. Hocoma are proudly represented by Summit Medical and Scientific in the UK.

Karen Smith, Fundraising Manager at University Hospitals Dorset NHS Charity, said: “The Walkerbot Appeal has been such an incredible campaign to be a part of and we are so grateful to each and every person who has helped us reach our fundraising target. The LokomatPro will make such a difference to the hospital in helping stroke patients relearn to walk – it is such an honour that University Hospitals Dorset now have access to such a modern piece of technology.”

Sara Brammall, Managing Director at Summit Medical and Scientific, said: “Congratulations to the fantastic fundraising team at Royal Bournemouth Hospital, and a huge thank you to all those who contributed to the campaign. This device will make a big difference to the lives of stroke patients and their families, who deserve access to the very best rehabilitation possible. We are very proud to have played a part in bringing such beneficial equipment to the hospital and look forward to seeing patients making great progress using the LokomatPro.”

Nuša Sušnik, Regional Account Manager, DIH EMEA, said: “The University Hospitals Dorset NHS Charity’s successful fundraising campaign is an excellent example of what can be achieved with determination and dedication. We are incredibly proud that the LokomatPro will be included in the rehabilitation protocols available to stroke patients at the Royal Bournemouth Hospital. Special thanks go to our partner Summit Medical & Scientific for their continued support in bringing new technologies to the market. Congratulations, and we look forward to hearing the success stories of patients benefiting from intensive gait training on LokomatPro.”

If you would like to find out more about how advanced robotic technology like the LokomatPro robotic gait rehabilitation device could be integrated into your clinic or hospital, please get in touch with Summit Medical and Scientific today on 01372 459863 or info@summitmedsci.co.uk.