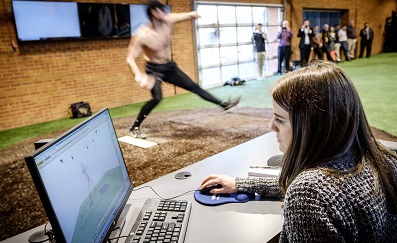 AMTI partnered with Wake Forest in the USA to develop a state-of-the-art pitching lab for injury prevention and performance enhancement.

This groundbreaking site features 16 high-speed, three-dimensional cameras, a motion capture system and an embedded AMTI force plate in the pitcher’s mound with reflector markers on the pitchers.

Work in the lab already is paying dividends. Morgan McSweeney is a junior righthander from Hudson, Massachusetts, who has had middling success in his first two seasons at Wake Forest.

“The big thing I’m learning with the pitching lab is it quantifies things we are looking at in terms of transferring force and being efficient in your mechanics,” McSweeney said.

Through preseason and early season testing and analysis as well as extensive weight training and mechanical drills, McSweeney has shifted force on to his front leg and gotten the extension desired in his stride while allowing his back hip to fire as his arm moves forward. Additionally, his fastball has ticked up from the low 90s to touching 95 mph.