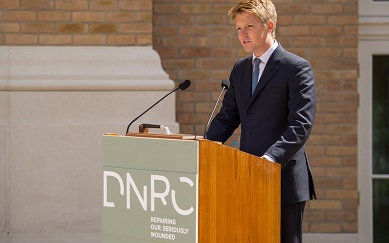 Defence and National Rehabilitation Centre (DNRC) gifted to the nation

We have been onsite since March at the new Defence and National Rehabilitation Centre (DNRC) in Stanford Hall, Loughborough (UK) to install a Motek CAREN High End system. The DNRC was gifted to the nation on June 21st by the Duke of Westminster and opened by the Duke of Cambridge and Prime Minister Theresa May. The Defence Medical Rehabilitation Centre at Headley Court will be transferring its services to the DNRC shortly, and a national civilian facility for the NHS is also being proposed. The CAREN High End system will play a key role in the site’s world-class offering of rehabilitation technology for major trauma and injury.

We are very proud, with our partner Motek, to have been involved in this state-of-the-art facility for rehabilitating our wounded service personnel. We will reveal more about the CAREN and our involvement at the DNRC soon.