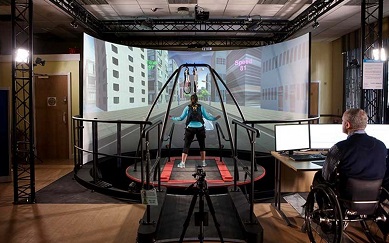 BASIC are currently working with 15 injured veterans who are receiving rehabilitation at the centre. This current programme is funded by the Sobell Foundation.

Military veteran John, a 31 year-old male, sustained an AVM (Arteriovenous Malformation) in 2017 while working at home building a horse box. Following admission to A&E he was diagnosed with an AVM and put into an induced coma. He then underwent brain surgery to stabilise the AVM and prevent it from re-bleeding into his brain. Following surgery he had a significant weakness of his left side, peripheral visual field loss on this left side and hypersensitivity on the left side of his arm.

He was unable to mobilise in terms of sitting and standing and his balance was compromised. He was totally dependent on all needs. At 8 weeks he was discharged from hospital. He was referred to BASIC following discharge from NHS services, under our veteran bursary program. This bursary has been funded by the Sobell Foundation.

The physiotherapist identified appropriate virtual reality applications and progressed accordingly. He agreed to be harnessed on the CAREN for safety. He attended all of the CAREN sessions twice weekly for a total of eighteen sessions.

Aim of CAREN sessions: To improve balance, gait (walking), visual field and cognition from therapy services by using the CAREN.

Although he was independent with his mobility, he had difficulty stepping over obstacles and his walking was compromised due to not being able to look up when walking and balance problems which put him at risk of falls. He had mild anxiety and depression. He still required supervision with activities of daily living (ADL) due to reduced high-level balance skills and remaining visual field issues, multi-tasking was difficult and his mood was low.

His personal goals were to reduce the sensitivity of his left arm, increase social participation, to be able to return to work and to be able to run again.

All his clinical outcome measures improved: his NEADL (Nottingham Extended Activities of Daily Living) saw a significant improvement. He achieved his goal of running along with his goal of being independent in his personal care. He is now volunteering at the Equestrian centre owned by his wife and independently socially integrates into society. He stated that the CAREN was motivational, challenging and exciting.

You can view the original case study on BASIC’s website here.