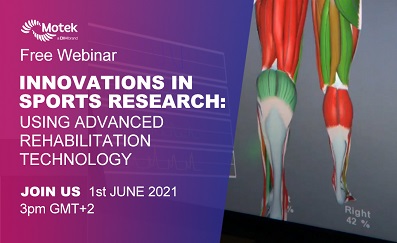 In this webinar you will hear from three renowned sport and human movement scientists talking about using technology for clinical running analysis, searching for impaired movement patterns, and gait retraining in running related injuries.

Bas Van Hooren is a sport science consultant, strength and conditioning specialist and athlete. He started his PhD on running technique, injuries and running performance in 2017 at Maastricht university. Bas has been active as an assistant strength and conditioning coach at the Dutch Olympic committee and has been involved as a sport science consultant for various professional organizations. As an athlete he has won several medals at the Dutch national championships, and he became Dutch National champion in 2017.

Bas combines his theoretical knowledge as a sport scientist/researcher with practical experiences from being an athlete and coach to translate complex theoretical concepts into useful and evidence-based practical applications. He has published over 30 journal articles on topics ranging from biomechanics to exercise physiology and has given multiple workshops on sport science related topics for a variety of audiences throughout Europe.

Juha Hijmans studied Human Movement Sciences at the University of Groningen and graduated 2002. From 2003 until 2008 he did several research projects at the Department of Rehabilitation Medicine of the UMCG, all related to balance and gait. In 2009 he successfully defended his PhD thesis on orthotic interventions to improve balance. After a postdoc at Industrial Research ltd. New Zealand, where he developed upper limb training devices for stroke survivors, he returned to the UMCG as clinical gait analyst. Now he is associate professor with a research focus on gait, ulcer prevention, VR and assistive devices.

Juha will talk about Gait retraining in running related injuries.