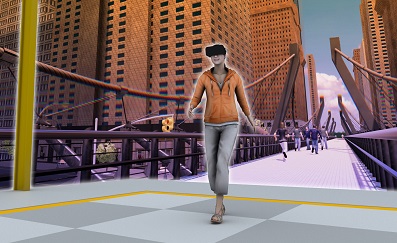 Yesterday we were introduced to VSimulators, the University of Exeter’s new facility which can recreate any environment using innovative technology. Click here for yesterday’s article.

In this second part of the series, we spoke to the team about their work in Human Movement Science and the real-world impact their research will have.

Can you tell us about the Human Movement Science Group?

Sharon: “The Exeter Biomechanics Research Team (ExBiRT) is part of the Human Movement Science group in Sport and Health Sciences. We collaborate with colleagues in CEMPS (the College of Engineering, Mathematics and Physical Sciences) to develop ways to exploit the VSimulators facility to improve understanding of human movement.”

Genevieve: “The nice thing about the Human Movement Science Group is we are really multidisciplinary at the moment. We are coming together to be interdisciplinary.”

Sallie: “You can see we have quite a broad group of people working together. We’ve got psychologists who are interested in anxiety and stiffening while you are trying to move, which can affect your sensory system quite badly. We have a really good group of people who are interested in looking at gaze function and visual perception through the VR headsets. And then we’ve got our colleagues in biomechanics, then we move to the mathematicians. It’s great because they are developing lots of new things like in silico models and they’re helping us to be able to take very large volumes of complex data. What we’re doing is streaming a lot of data from people, from the VR headsets, from the force plates, from the motion analysis, we’ve got the data that’s showing how the platform’s moving, we’ve got data that’s showing us how stiff the person is, which muscles are working well, which ones aren’t. It all has to be integrated in a really short amount of time, so we have massive streams of big complex data processed quickly. We hope that people will recognise that the Exeter team has a lot of breadth. And then the core of the team are the engineers who have designed a platform and environment and understand all the complex vibrations and environments. So the engineers bring really fresh stuff to the table. It’s quite challenging science because it’s quite a complex interdisciplinary environment which is quite exciting.”

Julie: “It’s great as well to see different people’s perspectives on the same challenge. That interdisciplinary aspect is really what’s becoming our core strength and seeing relationships build up between these different academic disciplines is fantastic.”

Sallie: “Both myself and Professor Vicki Goodwin have worked a lot in clinical practise, and we bring the perspective about what the real world is like and what you can actually do in a hospital or a community environment. What actually can a frail older person do? Ultimately, what we all want is for this science to be applied in some way. Of course, we can’t have a VSimulator in every hospital across the country, but what we’ll do is take the scientific learning and move it in through new technologies so that we can enable and achieve effective solutions to common healthcare problems.”

What real-world impact could your research have?

Sallie: “It will have quite profound implications if we can improve how older people can move around, make it safer and more enjoyable, and make them feel more confident in their walking. It’s not just about making people feel safe, because generally what happens when you make people safer is you just slow them down and they do less. We want them to do more, to enjoy life, have lots of energy and feel confident in their ability to stand up so that they can continue to look after themselves, shop for themselves, etc. We will extend the work on falls, to have a look at how people manage in quite challenging environments, such as bus travel, train travel and escalators, where the environment is moving quite a lot. Quite often, when you are sitting on a train, you can’t be sure whether the train is moving. Strange things can happen in these environments. And the older you get, the harder they are to deal with. So we could reduce the number of falls, which are really nasty when you get older. Not everyone injures themselves, but a quarter of people who fall have a nasty injury and some of these injuries are really significant, such as a broken hip, broken neck, fractured skull. So, certainly, we will have an impact on that area. And also improve the lives of people who have quite tricky neurological conditions like Parkinson’s disease, I’m sure we will learn more about that. We will be looking more at vertigo and other balance disorders, and at some point we will move on to stroke and orthopaedic conditions. So I feel that this is a fantastic platform for us to really push clinical science on.”

Julie: “There’s a massive cost to the NHS as well and the impact that these problems have – £4.5 billion – so there’s a societal benefit as well as trying to reduce that burden on the NHS.” 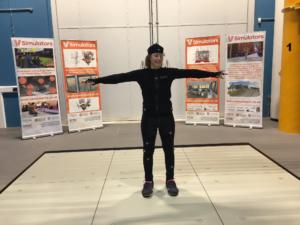 What other projects or collaborations are you working on at the moment?

Sallie: “I’ve worked with a network of people across Europe for the last 20 years who are interested in mobility in older people, so we have got collaborative grant applications that have been worked up with colleagues at the Robert Bosch Hospital in Stuttgart and the Robert Bosch Foundation.”

Julie: “We’ve also got some applications currently submitted awaiting confirmation looking at designs of sports shoes and designs of insoles, and an application at Parkinson’s UK looking at freezing of gait, so we should know about those fairly imminently.”
Hannah: “It could go so many other ways, we have so many other ideas. We could be looking at these healthy athletic populations, for example. One other area this could go down is this collaboration with engineering groups. We’ve got an ability to capture a lot of information, and we’ve done work where we’re combining that with medical imaging. For example, that allows us to reconstruct a bone or a segment in 3D. The ability to do that in the future is optimising human performance. The ability of the facility is modular, so you can add things in, meaning there’s equipment that’s not currently in there that could allow inclusion in the future. So it’s future-proofed in that sense.”

Julie: “We have a policy of continuously looking to the future and to keep the facility cutting-edge and state of the art, so we’re always happy to engage with people about what they’d like to see in there going forward. At some point we’ll move away from having tethered headsets – at the time we built the facility, the tethered headsets were the best option given the remit of the technology for virtual reality at the time. Although there were wireless headsets, they hadn’t caught up with the technological capability we needed for the facility. One of the early stage decisions would be to move that on to wireless. We’re just having an upgrade to the virtual reality systems to enable us to take 360 degree footage and build more bespoke customised designs in house, so we’ve always got one eye on the future.”

Hannah: “I’ve also got an interest in linking it with the M-Gait instrumented treadmill, and that treadmill room becoming a facility where you can pilot or familiarise participants in that environment and then do it on a larger scale using the VSimulator.”

Genevieve: “We’ve also got probably the best amount of ecological validity, so real-world representation that we can get in a lab based on our current technology. By having 360 degree real-world footage in a VR headset, you’re a further step towards taking in-lab data out of the lab. Similarly, with the size of the platform and the ability to create drive files that represent the acceleration of real world moving trains, for example, rather than just sinusoidal oscillations, we’re probably one of the only facilities where you can do that. It’s just trying to create that real-world environment in the lab but also having control of it, so we can design really nice experimental studies to see what aspect of that real-world is influencing the functionality of people.”

Julie: “It’s a bit like driving the Starship Enterprise.”

For more information about VSimulators, please visit vsimulators.co.uk or get in touch directly at vsimulators@exeter.ac.uk. You can read the full technical specifications of the VSimulators facility here.