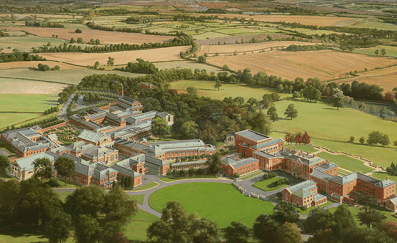 Treatment at DNRC Stanford Hall could be available to the public

The Nottingham Post wrote yesterday that the Defence and National Rehabilitation Centre (DNRC) could make its treatment facilities open to civilians who have suffered major trauma injuries. The DNRC also confirmed that they are exploring the potential for a national facility onsite at Stanford Hall on Twitter.

Detailed plans are being put together by the hospital trust which runs The Queen’s Medical Centre and City Hospital, aiming to offer rehabilitation services at the DNRC which are currently offered to severely-wounded military servicemen and women. When the DNRC was designed, the founders always hoped to open part of the centre for injured members of the public in need of intensive rehabilitation. Now £70 million is being put into the centre by chancellor Philip Hammond and the site is being planned by Nottingham University NHS Trust (NUH), saying the facility has the potential to ‘very significantly’ improve the rehabilitation which people in the East Midlands receive.

Alison Wynne, Director of Strategy and Transformation at NUH, said: “The trust welcomes the recent budget announcement which pledged £70 million towards the capital cost of the National facility which has potential to very significantly improve inpatient rehabilitation services and clinical outcomes for patients in Nottingham and across the East Midlands. Alongside the capital required to create this facility, important work is underway in the NHS, led by NUH and its clinical experts, to establish appropriate sponsorship and project management of the National facility. At the same time an application to secure the detailed planning permission required to build the National facility is currently with the local planning authority.”

The Black Stork Charity, who started the project, welcomed the funding and said it will give the ‘National’ element of the DNRC ‘valuable momentum’.

Speaking shortly after the £70 million was announced, patron of the charity the Duke of Westminster said: “The Chancellor’s announcement in the Budget to pledge £70M towards the capital cost of creating the National facility is warmly welcomed by the Grosvenor family and The Black Stork Charity. From the outset the DNRC Programme has included the intention to create a specialist clinical rehabilitation facility for civilians alongside the armed forces establishment, sharing its expertise and facilities to mutual advantage. The Defence establishment is now open and treating the patients who have moved from DMRC Headley Court. This announcement will inject valuable momentum into ensuring that the full opportunity of the DNRC, as envisaged by the late 6th Duke of Westminster, is realised.”

Summit Medical and Scientific were proud to install the world’s most advanced gait lab, Motek‘s Computer Assisted Rehabilitation Environment (CAREN), at the DNRC earlier this year. This is already being used by military servicemen and women onsite, read more. You can also see the CAREN High End in use during onsite training here.