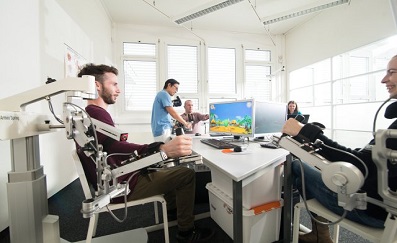 “A 20-year adventure in rehab robotics” – Hocoma in NR Times

Our partner Hocoma has been featured in this month’s edition of NR Times. The article, which can be read online, marks the company’s 20th anniversary and how Hocoma continues to push the boundaries of innovation in rehabilitation.

“Despite the initial challenges of launching such a high- tech product, over the past two decades, the Lokomat has become one of the most widely used gait rehabilitation devices in the world. It has helped to set an industry standard in rehab products for people with brain injury, stroke and other neurological disorders. Hocoma recently installed its 1,000th Lokomat.

But it has also built on the success of its flagship product by launching an array of other devices. Among its product portfolio is the Erigo, which assists with patient mobilisation in the earliest stages of rehabilitation; its Armeo range, which supports the recovery of arm and hand function; and the Valedo which targets back pain. The business is headquartered in Switzerland but works in 27 countries worldwide – and believes it is changing the lives of people in clinics across the globe.”

“With the huge move towards digitalisation through the Industrial Revolution 4.0, there will be a greater role played by artificial intelligence and virtual reality…

We will continue to develop as a business so we can continue to be at the front of what is happening… We are always learning by doing and have a network of research and academic partners all over the world and this enables us to come up with great products which deliver solutions.”