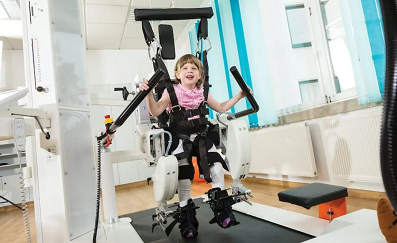 Hocoma and Motek: The twin forces creating a rehab superpower

NR Times, the leading neurorehabilitation magazine in the UK, recently covered how Hocoma and Motek have been leading the way in developing innovative rehabilitation and research technology.

The article, which can be read online at NRTimes.co.uk, shared how it’s been 20 years since Hocoma’s robotic rehab machine Lokomat was launched. In the decades since, over 300 peer reviewed journal articles on the gait training device have been published.

While Lokomat’s evolution has continued to be driven in that time, other devices have thrived too; including ArmeoPower, the world’s first exoskeleton for integrated arm and hand rehabilitation.

At Medica 2019, however, digital health was among the latest focus areas. HocoNet is a single software platform which connects to all devices in the Hocoma stable, as well as the existing hospital information system.

It enables rehab professionals to manage and keep track of patient, treatment and device data in a secure manner. Patient information need only be inputted once, on one device at the outset and is then synced across all equipment that the patient may require.

While it is loaded with numerous clever features, the overriding benefit is a vast reduction in the time spent on administrative tasks, and more time to treat patients.

Edward Heckes, global head of marketing & sales enablement, tells NR Times: “A trend we’ve seen in recent years is growing recognition of the need to better connect patients and therapists with the right sort of data.

“HocoNet aims to connect all of our devices involved in rehabilitation. So if the patient is practicing on one machine, information from that session goes back into the system and is used to calibrate their new information on any other machine.”

As well as Hocoma devices, the system also syncs up to devices produced by fellow rehab technology brand Motek.

Both companies have now been part of Hong Kong-headquartered DIH International for a few years, a fact which strengthens their parallel development, says Heckes.

“Through the different types of technology offered by Motek and Hocoma, we have really been able to further push rehabilitation technology spanning research and hospital environments.

Motek has predominantly been involved in research, so we work with lots of universities, military organisations and any other parties aiming to gain a better understanding of human movement.

“But Motek has been crossing that channel into clinical settings for some time too and it’s quite common to see Motek products in leading hospitals and clinics today.”

A rising star of Motek’s rehab tech offering is the C-Mill, which fuses a treadmill with augmented and virtual realities. In a demonstration at Medica, attendees watched a user navigating a serious of objects projected onto the surface of the treadmill, while also navigating an on-screen environment up ahead.

The machine offers an objective assessment of balance and gait. Crucially, it also provides intuitive training in foot placement, balance and dual tasks. Body weight support options enable its usage from early through to late rehabilitation.

Although a relatively large piece of kit to accommodate, at less than four by four metres it is significantly smaller than a traditional gait lab.

“Combining augmented and virtual reality adds to the patient’s motivation. This is something we’ve learned with the Lokomat – it’s really important to keep patients motivated if they are having to use it again and again during their rehab treatments.”

A poster boy for C-Mill’s power is the British professional golfer Mike Jones. After he lost his leg in a motorcycle accident, the C-Mill at the Morrello Clinic in Newport Wales, was instrumental in his recovery.

Other UK locations to have used the technology include the Brain and Spinal Injury Centre (BASIC) in Salford and the Portland Hospital for Women and Children in London.