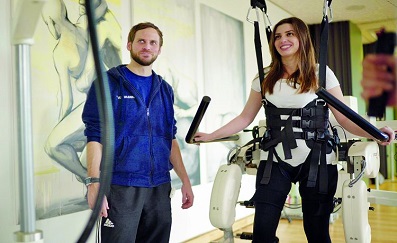 A recent article shared by Drive.Tech looks at how paraplegics can learn to walk again through intensive training using modern robotic mobilisation equipment.

Rashide Serifi (25) was confined to a wheelchair after being diagnosed with paraplegia. When giving birth to her son four years ago she was given an epidural injection for the pain, which caused meningitis. This was followed by six operations and long stays in the hospital, resulting in her being unable to walk.

Rashide found a therapy center in Germany, where she received intensive training with therapists and robotic equipment. The machines (the Hocoma Lokomat and the Hocoma Erigo) allowed Rashide to train much longer and harder than with the support of a therapist alone. This took her to her physical limits time and time again, allowing her to strengthen her legs and core muscles. After several months, the young mother took her first steps with the help of crutches. A little later, she was even able to cover short distances without support.

“Our robotic devices alone don’t perform miracles,” says Matthias Jörg, developer and founder of Hocoma. “However, they facilitate much more intensive therapy, and that is key. When a child learns to walk, they don’t do it once or twice a week, but rather practice more or less around the clock.” Robotic devices also make it easy to measure progress made, and motivate patients with fun incentives.

The success speaks for itself. More and more clinics and rehabilitation centers are using Hocoma products. Around the world, over 2000 units are now being used to treat neurological movement disorders, strokes, and incomplete paraplegia.

Read the full article on Drive.Tech to see Rashide’s story and how Hocoma uses Maxon drivers and controllers to achieve incredible efficiency.